BGM - The Block Generator for Minecraft

Download Demo
Get it on itch.io
v0.0.2 Runs on Windows, Linux

This information is for version 0.0.2.
Both the full version and a demo of BGM are available on itch.io.

Please note that this is a very early version of BGM. The syntax, functions and general functionality will likely change in the future.
Avoid creating a large database of scripts for now, since they might not work with future versions.

Note that the demo works just like the full version and all documentation is valid for it as well.
The only difference is that the executable is called bgmDemo instead of bgm and that there’s a limit for the maximum number of generated blocks.
The demo will simply reject generating output if this limit is exceeded.

Be careful when defining huge structures since these can cause the creation of a lot of blocks, possibly filling your entire memory.
You must therefore be careful when running scripts from others.

BGM uses its own language to describe the generation of blocks.

Expressions are used to generate blocks.
The final result is the union of the results of all expressions.
There’s expressions that use scopes via { and }. These expressions apply to everything within the scope and can be nested.

Please note the detailed description of the expressions below. 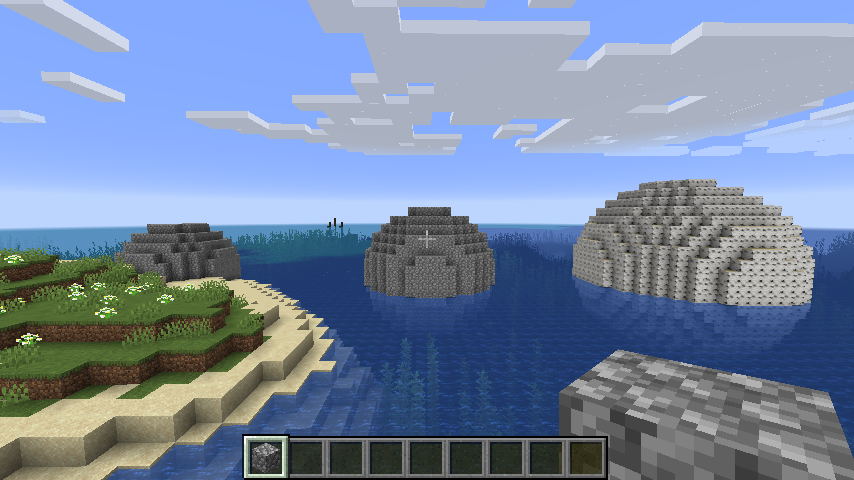 Placing a single block at the defined position

put keyword followed by the position 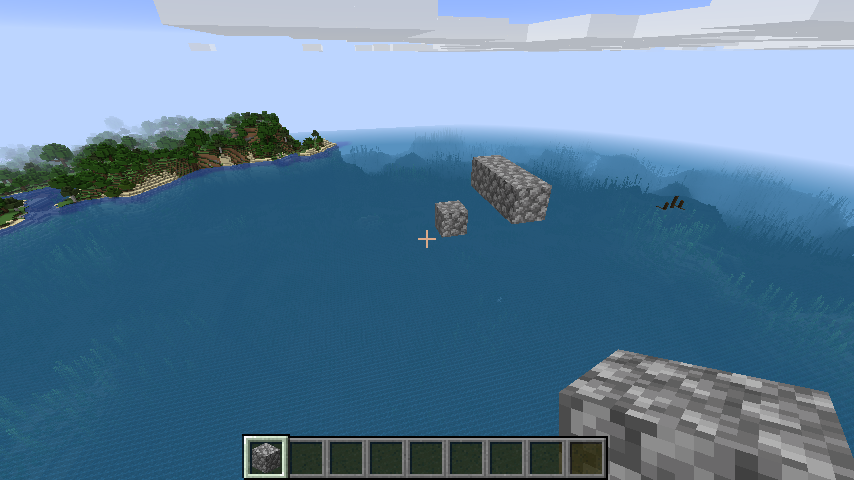 x, y or z define the general orientation / direction of some expressions.

There’s several basic shapes that you can use within your scripts. 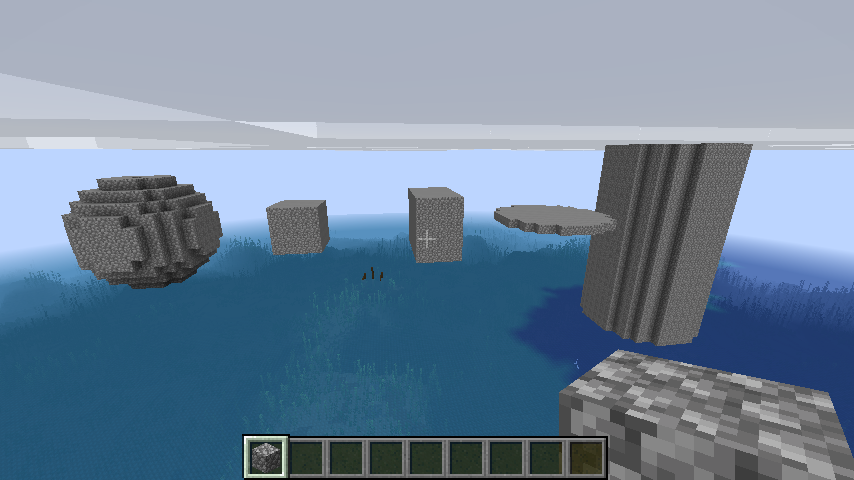 You can move blocks relatively by wrapping them with a movedBy followed by a position.
The shift applies to everything within the { scope }.

You can move blocks absolutely by wrapping them with a movedTo followed by a position.
The blocks within the { scope } are moved to the given position in such a way, that their center is located there.

You can copy blocks relatively by wrapping them with a copiedBy followed by a position.
The shift applies to a copy of everything within the { scope }. 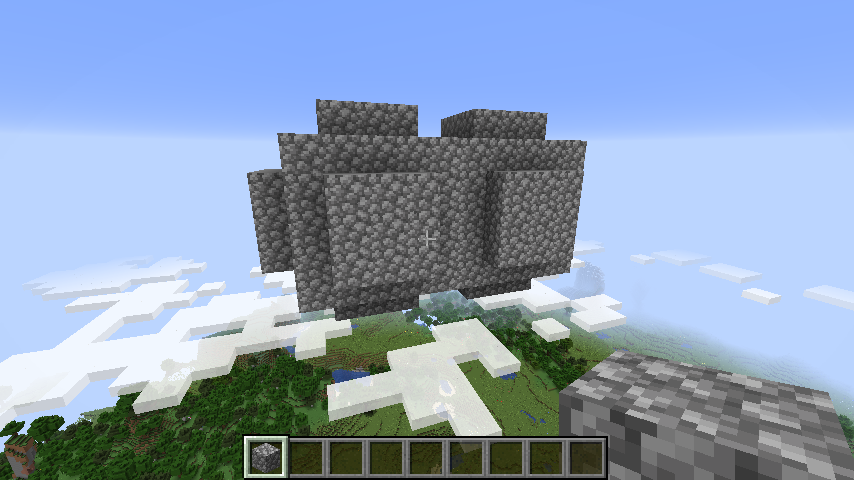 You can copy blocks absolutely by wrapping them with a copiedTo followed by a position.
The blocks within the { scope } are copied to the given position in such a way, that their center is located there.

You can set the material of blocks via the material keyword.
The material applies to everything within the { scope } unless overwritten further in.
The default material is cobblestone. 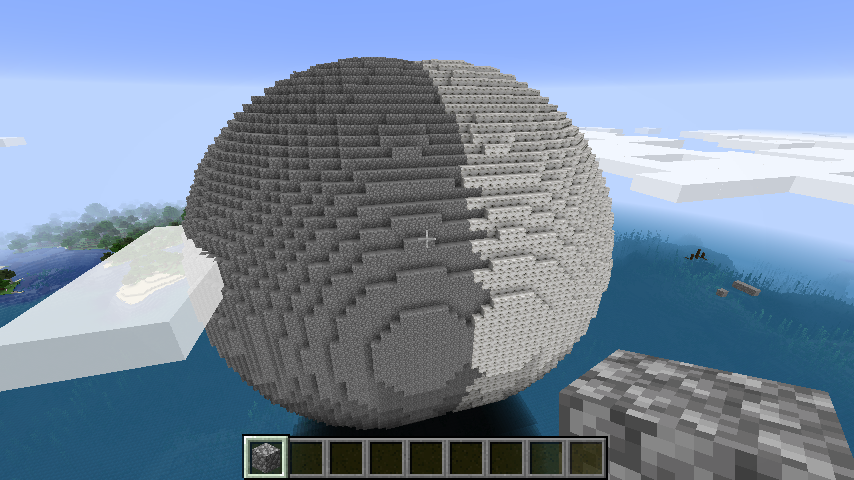 You can use only followed by a material to only keep blocks of this material within the { scope }. 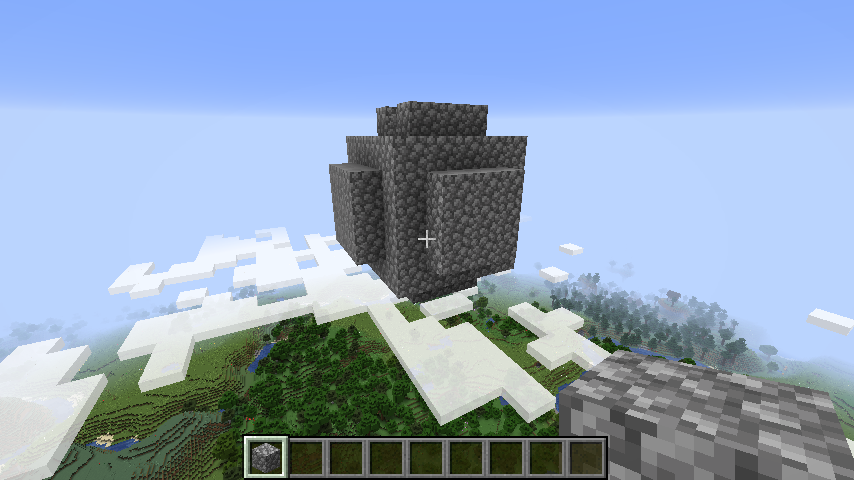 You can use if followed by a condition to only generate the blocks if true.
Please note that there’s currently only the equality check via ==.

You can use loops to generate blocks multiple times.
You can use the iteration variable within the scope. 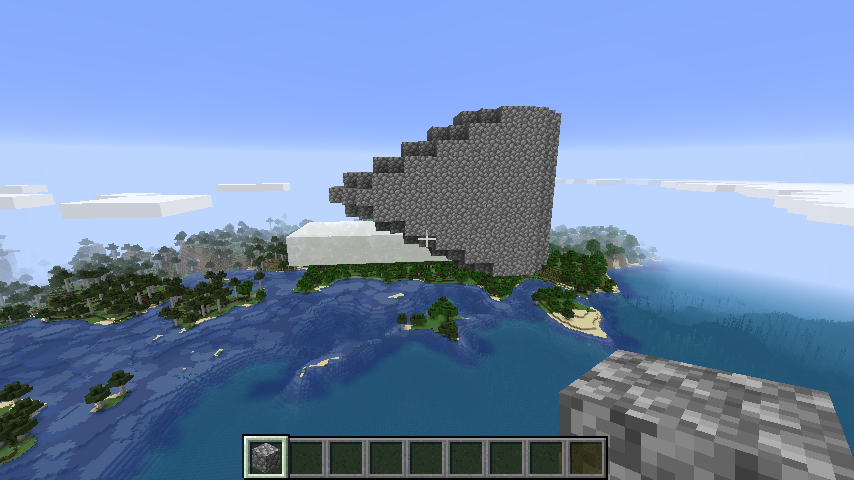 You can generate the difference of the first minus the second scope. 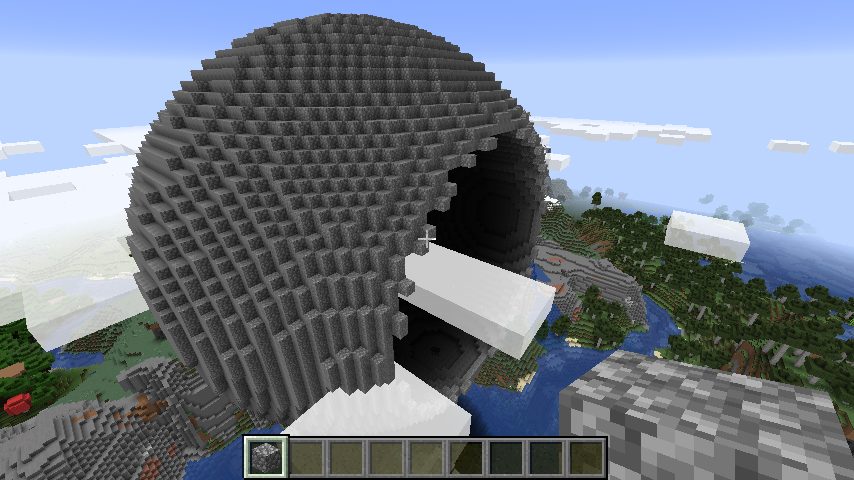 You can generate the intersection of two scopes. 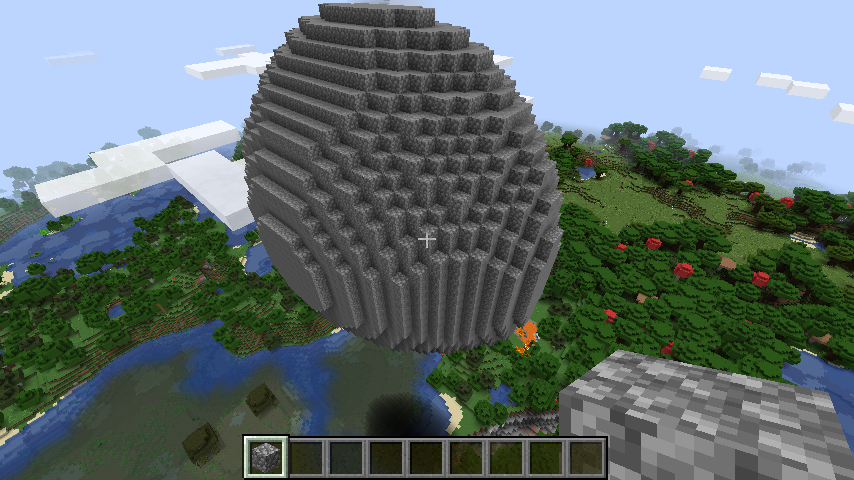 You can extrude an expression by defining the motion/shift of the extrusion and what to be extruded via a scope. 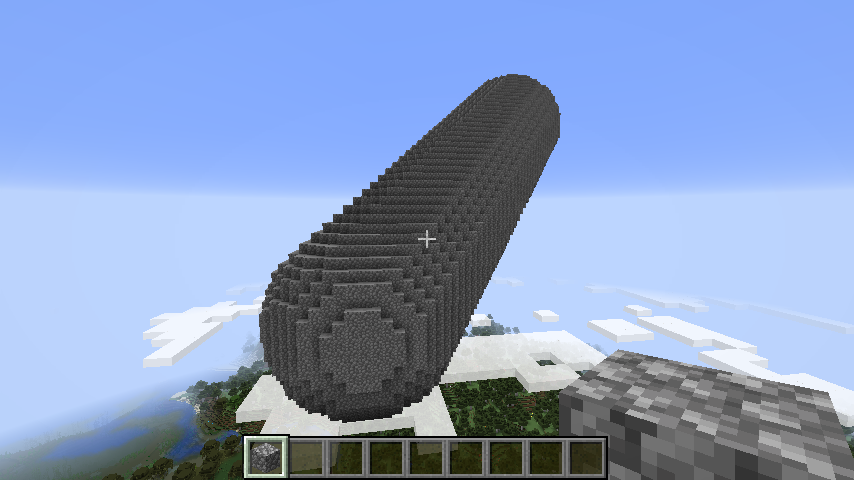 You can remove every internal block from an expression by using hollowed.
Note that the result will look the same as before until you poke holes into it.
This is handy to reduce the total number of blocks.

You can mirror a scope via the mirrored keyword and a direction.
Note that you’ll usually want to apply a movedBy within the instruction, since most shapes are symmetrical. 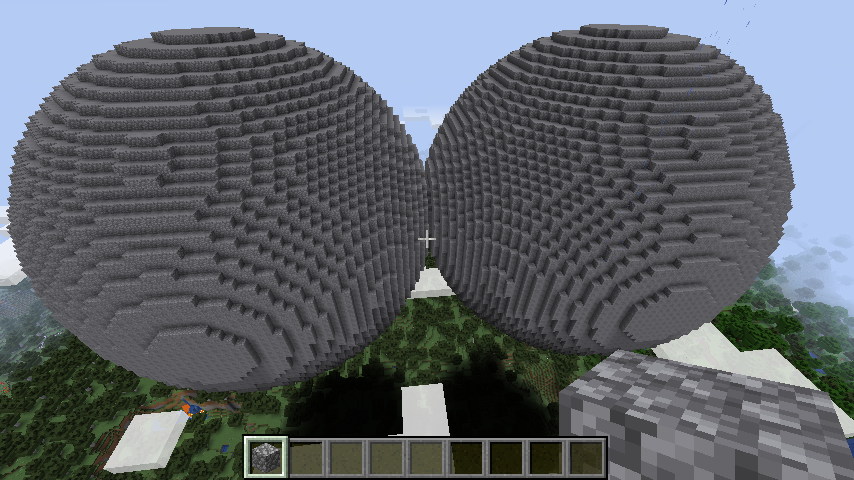 You can flip a scope via the flipped keyword and a direction.
Note that you’ll usually want to apply a movedBy within the instruction, since most shapes are symmetrical.

surrounded will place blocks of the given material around the scope. 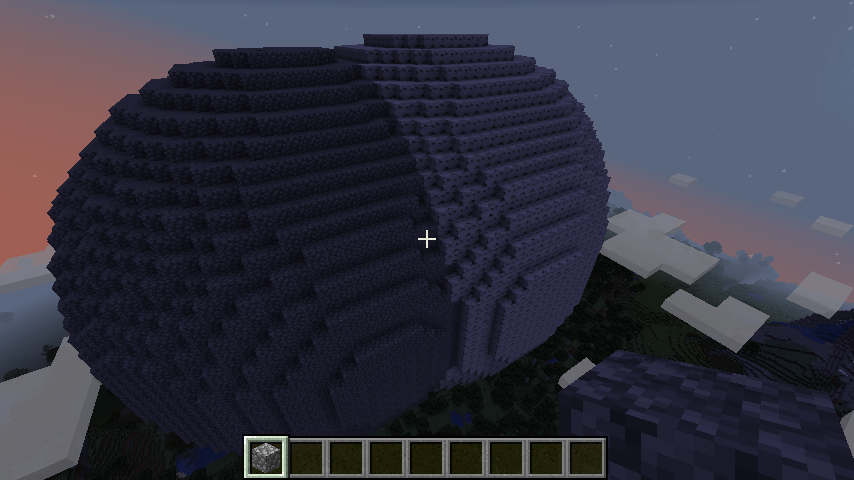 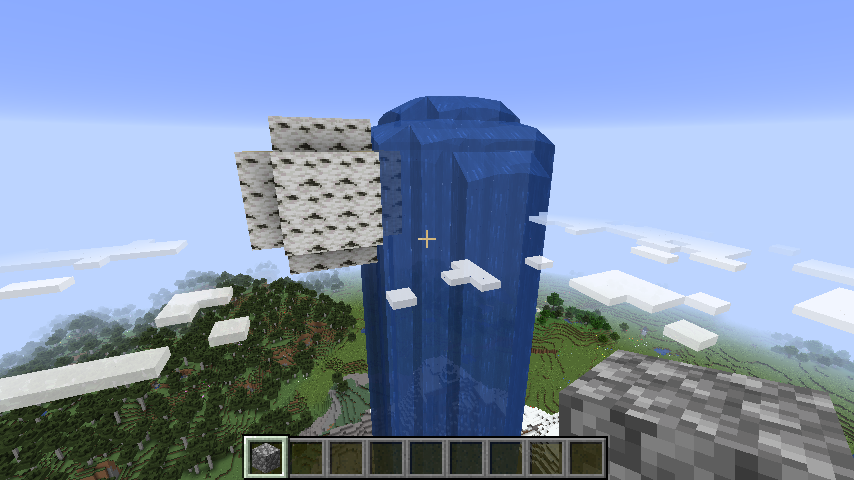 removed will remove any block with the given material within the scope. 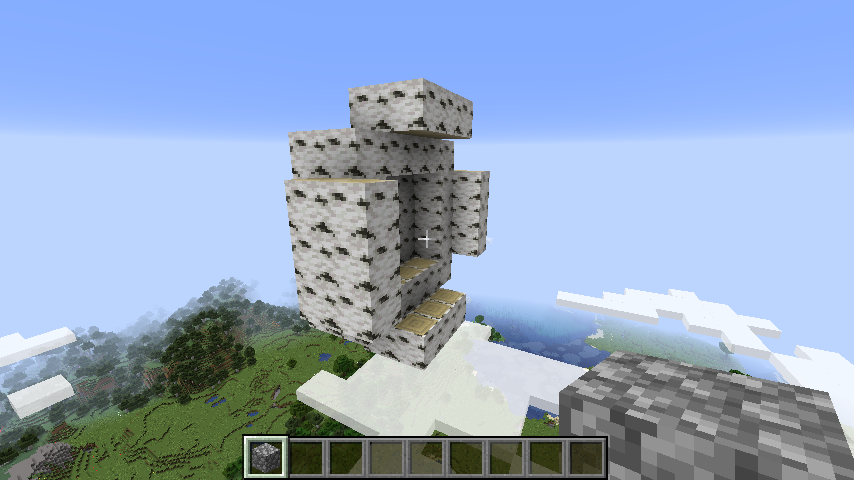 You can define functions via the fn keyword followed by the wanted name and required parameters.
Please note that function definitions must appear at the top level of your program.

You can then call functions via the call keyword anywhere in your program.

In order to use BGM you have to create a datapack for your save. (See https://minecraft.gamepedia.com/Data_pack for additional information)
Within your Minecraft home folder (e.g. .minecraft) you’ll find the saves folder with a folder for your world. In there you’ll find a datapacks folder. For example ./minecraft/saves/WORLD_NAME/datapacks
I’ll use bgm as folder name and run as function name, but you can choose whatever you want.
Create the following folders and files within datapacks:

run.mcfunction shall contain the output of bgm.
The final folder structure will then look similar to:

Make sure you’re either in the folder where you placed bgm.exe or have it added to your PATH.
You can run it by passing the path of the program as first parameter.
(If you only have the demo, replace bgm with bgmDemo below)

If you set everything up as in the Preparation folder, you can directly write to the final path, saving you some time

There’s several parameters you can pass to bgm.
Note that the path to the program must always be the first parameter.

Final x-shift applied to all positions

Final y-shift applied to all positions

Final z-shift applied to all positions

Example with many parameters

Please make sure cheats are enabled for your world, otherwise below won’t work.

Once you prepared your files and folders and filled run.mcfunction with the commands, you can head over to Minecraft to run the commands. (See https://minecraft.gamepedia.com/Commands for additional information)

You can run commands by pressing t or / on your keyboard.

Call /reload whenever you made changes to run.mcfunction.
Call /function bgm:run to execute the commands.