I spent some time reworking all belt-like Structures. All of the belt-like graphical assets have been updated. You’ll also notice that the different Structures now fuse much more nicely.
Belt corners are now also active when other belt-like Structures are connected to Belts (instead of just for Belt - Belt connections).
Below an image showing the new belt improvements (OLD | NEW):

With this release Arms are reworked entirely. I didn’t like how Arms were the only Structure where the ‘tier color’ affected the entire texture. This caused for example green Arms to be barely visible on grass.
I therefore reworked their graphical assets to have ‘tier indicators’ instead.
In addition to the graphical changes I also decided to greatly reduce the speed of Arms, and added easing to their animation. There’s also many more tiers of Arms now.
Below an image comparing OLD | NEW:

Assemblers now have much larger ‘tier indicators’. Their light now also shines in the respective tier’s color, making it easier to tell them apart. I also slightly changed their background color to generally increase contrast to their recipe.
Below an image showing the changes (OLD | NEW):

Previously Combine And Conquer used ‘random’ colors for its Structures, Items and UI elements.
This has now changed and for the most part only colors from two color palettes are used.
One is used for the tier / Mk indicator of Structures, the other for colors in general.
Below an image showing the new color palette usage (OLD | NEW):

Previously I had individual graphical assets for all the different tiers of Items and Structures.
For example: Belt, BeltCornerLeft, BeltCornerRight, FastBelt, FastBeltCornerLeft, …
I finally created an automated process to generate different tiers of assets and can now simply define that there should be for example 5 tiers of Assemblers, causing all the assets to be generated automatically with the matching tier indicator.
Since this now makes it trivial to have multiple tiers, I went ahead and added many more.
I also changed the naming convention for Items, Structures and technologies to use an MkN suffix.
Belt -> Belt Mk1, FastBelt -> Belt Mk2 etc.
Below an image showing the new tiers of Structures (OLD | NEW): 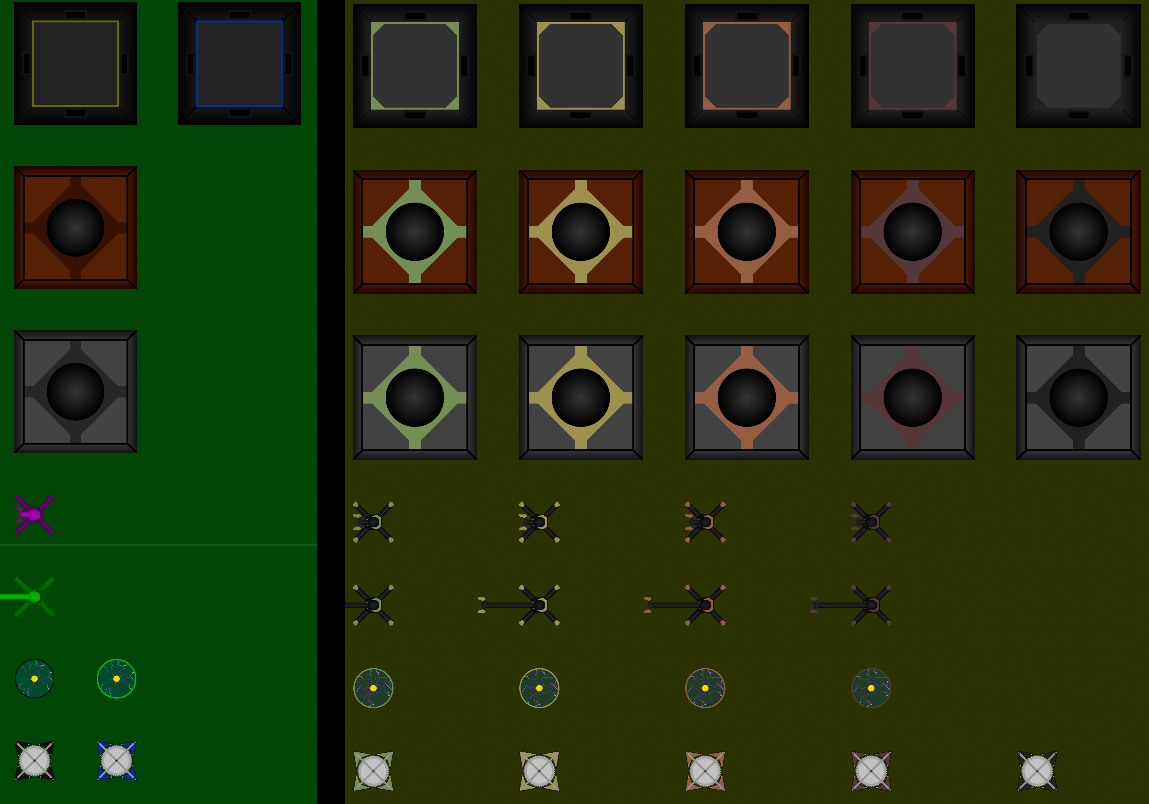 This release greatly improves the Info Box.
I implemented support for multi-colored text which is now used heavily for the Info Box.
The shown text has been compressed to save space and generally much more information is now shown in the Info Box.
Below as an example the Info Box when hovering an Assembler crafting Gears (OLD | NEW):
(Note that the orange line displays the raw material cost which is the same as the input in case of Gear) 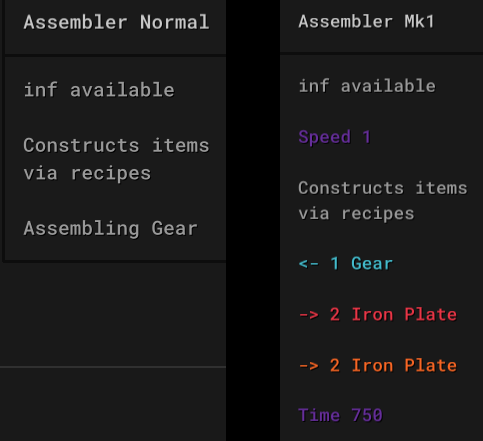 There have been several improvements to the visuals of planets within this release.

All planet tiles have been reworked and are now less colorful while using smoother noise.
Below an image showing the new tiles (OLD | NEW): 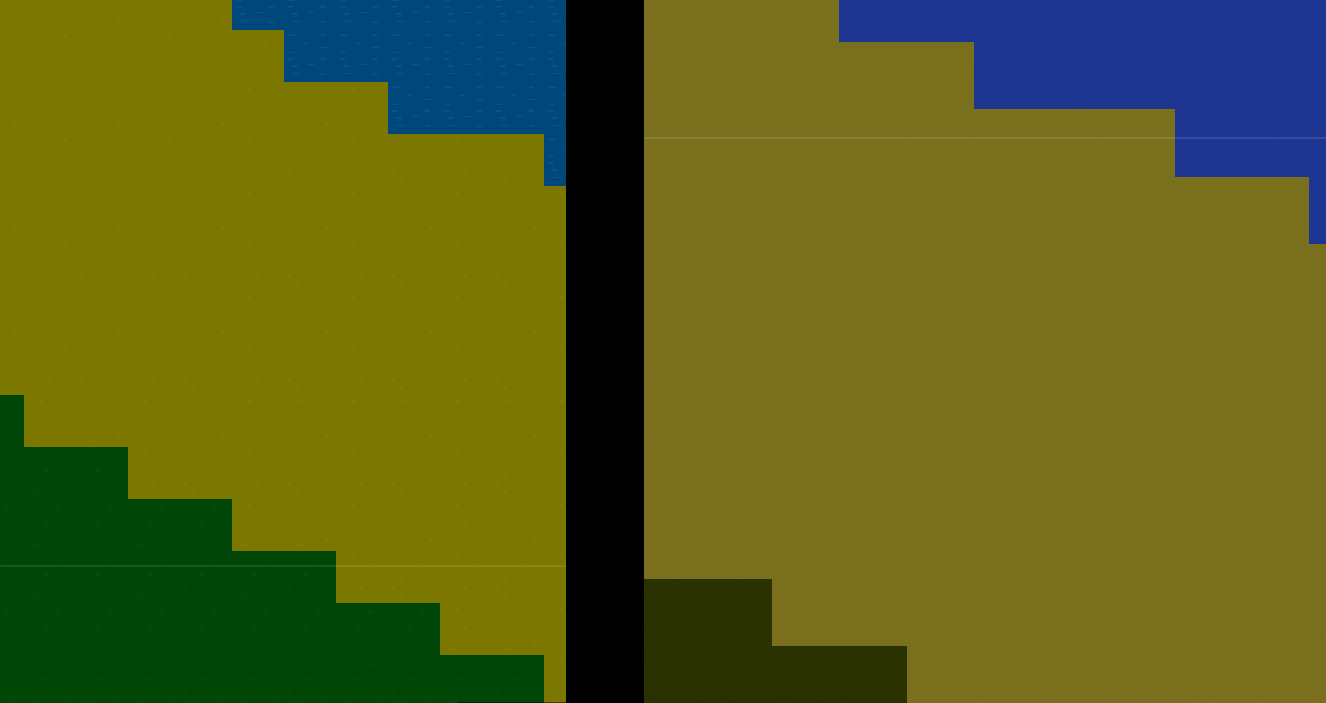 Previously planets were only shown as round in the space view. Now they are actually round.

I improved the way a planet’s temperature is calculated. This now yields way smoother transitions between for example ice and water tiles.
Below an image showing both the round planets and smoother temperature transition:

To improve performance the renderer now switches to a rougher tile quality more early.
It’s implemented in such a way that the change should be barely noticable while cutting the number of rendered tiles roughly in half.

In addition to the Arm, Assembler and Belt changes, I also updated some of the other assets.
Below an image comparing OLD | NEW:

This release brings another batch of improvements to the Module system.

It’s now possible to delete Modules from the Module View either by using the Delete key, or using the Remove cursor.
Note that they are just hidden from the view since they may still be referenced by other Modules or actually be placed on one of your planets. Due to that you may run into ‘name in use’ issues without seeing a Module of such name in the view.

The item count of Sources and Sinks is now also shown in the Module View.

Previously a Module’s activity indicator was rendered above its content. This is not the case anymore and should improve readability.

On planets it’s now possible to remove selected Structures. I also added a confirmation dialog to prevent you from accidentally deleting your factory. 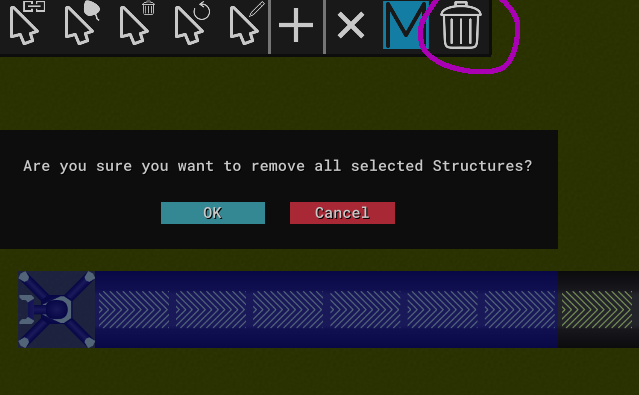 I greatly improved the performance of user interactions.
Adding new Structures at the edge of your factory is now way faster.
Due to the new ‘selection delete’ I also had to improve the remove performance. For the single removal case it’s roughly 10 times faster than before. There’s also additional optimizations if one removes many Structures at once.

With the recent switch to a new font the font size was also greatly increased.
This time I slighlty reduced the font size to have some more space for text.

For changing the volume simple + and - buttons were used. This release adds new, dedicated volume buttons.

I removed basically all UI transparency. It was hurting readability especially if there was other text rendered below overlays that also showed text.

The Overlay is now rendered with 4 item columns instead of the previous 3. This release added a lot more Items and Structures and made that change necessary to save some space.
I also slightly changed the Overlay’s color to increase contrast.

Savegame files now have a versioned file ending. Combine And Conquer will now only show games with the matching ending.
This way you won’t see games listed that would fail to load anyway.

There have been many changes to costs of technologies and recipes.
Some recipes and for example Furnaces were slowed down to be more in sync with the new Arm speed.
Higher tiers of Structures now each roughly require 4 times the power of the previous tier instead of the former 2.
Solar has been nerfed and requires a technology unlock while Burner Power was buffed.
There have also been many more, minor changes to recipes and research costs.

All cooldowns are now rendered as billboards, ignoring any rotation.

There have been several bugfixes in this release.
Connecting rotated Structures that have asymmetrical shapes could fail in previous versions. In that case the affected Structures would not interact with each other. This is now fixed.
Previously there have been cases where a Structure’s activity indicatior did not match its actual state. This is now fixed for Labs, Assemblers and Furnaces. I’m not aware of any more broken cases. If you find some, please let me know.
Items on Crossings are now correctly rotated.