This version finally contains all the features I consider necessary for this type of game.
Therefore Combine And Conquer is now leaving the prototype stage and moving forward to Early Access :) .

The last missing piece for leaving the prototype stage was proper savegame management.
This version introduces a new view for managing your savegames that can be accessed from the hotbar.
From this view you can:

Below the new hotbar button for the savegame view and the view itself: 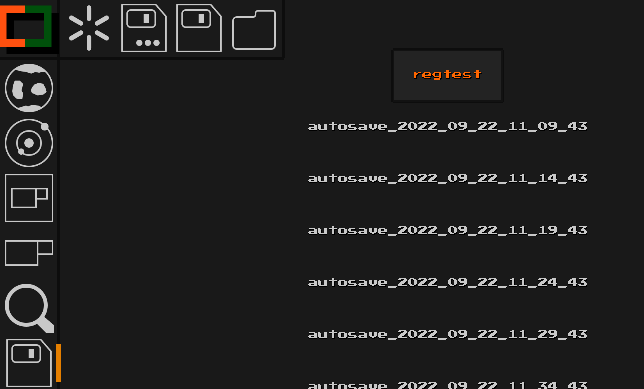 Note that Combine And Conquer now always starts with a new game. Use the savegame view to load the game you want to play.
Thanks to those changes and since I was already working on these parts of the codebase, there have been additional improvements:

Previously there was just one autosave file written while playing. Due to that it was rather easy to accidentally overwrite previous games.
From now on autosave files will have both the current date and time in their name, preventing accidentaly overwrites. For example:

Settings regarding savegames and the client have been removed from the configuration file, since this is now handled via the new view.

I improved the render pipeline to allow for a better render quality.
Thanks to the changes done for this, GPUs with smaller texture size support can now be used, while also allowing for more game textures/icons or a higher texture resolution in the future.
Below the before [left] and after [right]:

I applied several improvements to the planner and blueprints in general.

Support for multiple Blueprints within the Planner

Previously one could only edit a single blueprint from within the planner.
This caused many functions to delete the player’s previous work.
With this release the planner can now be used to edit any number of blueprints. Functions that create a new blueprint (e.g. Edit Module) now simply add a new one to the planner instead of causing overwrites.
For this, new buttons were added to the planner:

The planner’s text now also indicates which of the blueprints is being edited.
Below an image of the new buttons and the currently selected blueprint (Blueprint 1/1)

There’s now the new stop condition Stop When All Sinks Have Items. While active, the planner will stop the simulation once any Sinks are present and all of them have items in them.
This makes it pretty easy to find the proper tick count for when the module would first produce all the wanted items.
The Stop At Max Ticks icon was reworked to be able to tell the two apart.

Improvements to ‘Blueprint from Selection’

This release improves the ‘creating blueprints from selection’ workflow.
Previously if there were any Structures selected that aren’t allowed within the planner (e.g. Miners), Create Blueprint From Selection would have failed.
With this version, unsupported Structures are simply not copied to the planner and a warning is issued when this happens.
Also the blueprint is now centered better within the planner.

Previously there was a dedicated button to set the Modules name. Having a name was required for using Modularize Blueprint.
This was quite annoying to use.
Now, Modularize Blueprint will prompt you for a name instead, removing the need for the extra step and button.

I reworked the Restart on Edit icon to improve its clarity.

There have been some quality of life changes for the Overlay:

This way less player interaction is required when using the Overlay.

Due to how Combine And Conquer‘s singleplayer was implemented, the simulation was running twice.
Once for the actual ’client’ game you’re using and once for a ‘fake server’.
This was now reworked and the ‘fake server’ doesn’t have to run a full simulation anymore, cutting total CPU usage for the simulation in half.

Combine And Conquer now supports rendering of objects while ignoring their rotation.
This is for example used for recipes of Modules and Assemblers. Previously a rotated Module or Assembler would also have its recipe rotated, reducing clarity.
Below an example of the before [left] and after [right]: 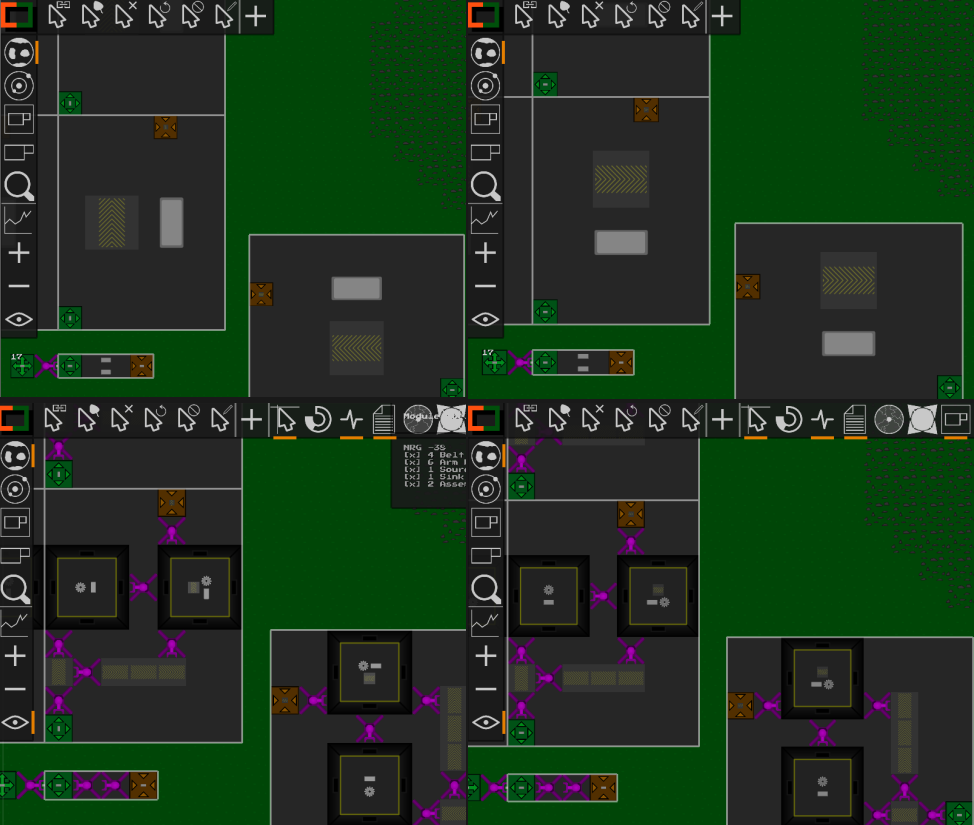 There have been some improvements to the sound engine and new sounds were added:

The Arm textures were the last remaining ones with outlines. I reworked them:

There have also been other, minor improvements:

There have also been several bugfixes: